The envy of Men's Clubs everywhere, ours promotes camaraderie through creative and fun golf competitions.

III. Approval of the Minutes
1. No minutes from last meeting

IV. Reports
1. General Manager
• Sr. Club Championship – 30-32 members signed up, would like to have 50.
• 4 ball tournament – 22 teams signed up, 32 teams is normal count, to be played in brackets.
• Course maintenance
a. Bathroom on canyon 5, septic tank to be installed week of 26th
b. Start to vericut fairways April 26. 18 holes will be open during the week and 27 holes will be open Friday thru Sunday. Fairways will be pretty torn up for a week or two, but results before Spring tournaments start should be great.
c. Reflooring of the restaurant and bar will take place week of 26th. When it happens, bar will be close and snack bar will substitute for service. Estimate 1 day of closure for flooring.
d. League play was successful, but will need to revamp for next year due to timing of how long rounds took for weekend early mornings. Will work on changing format and schedule for mid-morning or afternoon rounds.
e. Member-Member – Calcutta may not take place due to Covid19. Hoping to have 100% open by June 15th but will depend on County restrictions.
2. President
• New Men's Club elections - John Levitt (President), Doug Reynolds (Secretary), Mike Sanders (Appointed - Vice President), and Tony Serritella (Appointed - Member at Large) and Tom Cowley (Handicap Chairman).
• Meetings will be held bi-monthly, instead of monthly, on the 2nd Wednesday of the month. Any other communication needed can be done via email.
3. Vice President
• Bunkers - possibly invite Sean to meetings to give some insight of when course maintenance will be done and bunkers will be repaired.
4. MC Tournament
• Not in attendance
5. Non Tournament
• Tony talked about League Play being great event, how lot of members view it as a key event and enjoy playing match play. Part of issue is slow play, holding up regular play at the course.
• Team Play - Rich Vesley tried to give everyone a chance to play, but team didn’t perform too well this year. He may change the draft next year to get better players involved in the matches.
• Joe Sidoti is ramping up 2 for Tuesdays.
• Friday Skins - Continues to be a popular event. Hard to get enough tee times. Right now there are 28 spots on a normal basis.
• Away tournament - should start to be planned in advance, maybe Palm Springs or Temecula. Fall away tournament was voted and passed to play in Palm Springs. Usually in November of each year. Most members deal with their own lodging. Start looking for a package deal with golf and lodging. Discussions about possibly making it a 3 day event.
6. Handicap Chairman
• Focus is on tournament posting. The Chairman took half of people from the last tournament and conducted an audit. Several members are missing multiple postings. One member did not pay Men’s Club dues but still played in tournament which is an issue that needs to be addressed in the future.
• Some members aren’t paying their SCGA dues thru MPCC so the Chairman can’t check their scores and postings.
• The Chairman will send notice by emails to say “post your scores” to members with posting discrepancies.
• After tournaments, members need to know who will post the scores - the shop or each player. Typically it is the shop after a tournament.
7. Treasurer
• 1 new member in March.
• 100 members in the Men’s Club and about 60 members participate in tournaments.
• $14,444 in the bank account. League and Team Play have been paid for. For upcoming tournaments, we should try to get better pricing on meals. They are charging us more for tournaments vs. regular menu pricing and without any real service.
• Member-Member and Member-Guest will use some of the budget for cart girl, meals, and gifts.
8. Member at Large
• Sales of the green books went well, members should pay first before receiving greens books.
• There was 1 member that played in the Stableford tournament, place in the Net Flight, but did not pay to join the MPCC Men’s Club. Rule should be, you don’t pay fees, you don’t play.

VII. Comments and Announcements
1. None

This is an unflighted event.  The two-man teams must have a handicap difference between them of at least 5 strokes.  For example, a 2 handicap cannot play with someone with less than an 8 handicap, and a 6 handicap with less than a 12 handicap, etc.  Each player hits a tee shot.  The team chooses their best tee shot and from that point they play alternate shot until the ball is holed.  All participants will play from the combo tees.  This event shall be played on Canyon Crest and Ridgeline.  This tournament is NET ONLY.

This is a new tournament.  In this format two-man teams will compete in two flights.  The two-man teams must have a handicap difference between them of at least four strokes.  Both players will hit shots and then choose the one they wish to play.  This continues until the ball is holed.  There will be two flights.  The lower handicap flight will play from the blue tees.  The higher handicap flight will play from the combo tees. This tournament shall be played on Ridgeline and Canyon Crest.  This tournament is NET ONLY.

This is the first major of the year.  This is a match play tournament.  The format has been changed for this year.  We will return to the four-flight format.  Each flight will play from a different tee box depending on their handicaps.  The top flight will play the black tees, the next the blue tees, the next the combo tees, and the last the white tees.  All matches must be completed by February 27th.  The head pro will schedule matches to meet that deadline if there is a conflict between players.

The Individual Stableford is a full field unflighted event.  Stableford scoring will be used for this event.  In this Stableford, a double eagle will be worth 8 points, an eagle will be worth 5 points, a birdie will be worth 2 points, a par will  be worth 1 point, a bogey will be worth 1 point, and a double bogey or more will be worth 2 points.  All players shall pick up after double bogey as there are no other point values.  All point values are based on net score.  All participants shall play from the Men's Club tees that vary from 6200 to 6300 yards in length.  This is the first of three unflighted events that pit all players against one another to help determine the Player of the Year.  This event shall be played on Ridgeline and Creekside.

The 4-ball championship is a two-man flighted match play event.  The winner of this event qualifies for the SCGA 4-ball championship later in the year.  This is the second major of the year.  All participants are required to play their first match on Saturday, May 1st.  Subsequent matches will be scheduled between the remaining participants until the final matches, which will  be played by Saturday, May 29th.  This is a limited field two-flight tournament, the first flight will play from the blue tees, and the second flight will play from the combo tees.  The head pro shall determine which courses will be played for this tournament.  All matches must be completed by May 29th.  The head pro will schedule matches to meet that deadline if there is a conflict between players..

This is a flighted two-man event that is played in five different nine-hole formats.  There are three flights.  All flights will play from the combo tees.  The formats are Shamble, Alternate Shot, Scramble, Best Ball, and Aggregate.  It is played on all three courses.

The Summer Challenge is an individual unflighted full field event.  This is a regular stroke play event.  All participants shall play from the Men's Club tees that vary from 6200 to 6300 yards in length.  This is the second of  three unflighted events that pit all players against one another to help determine the Player of the Year.  This event shall be played on Canyon Crest and Creekside.

The Member Guest is a two-man event wherein teams are divided into six team flights.  Each team will play round-robin 9 hole matches against the other teams in the flight.  The winners of each flight will then play off in a Horserace style final that will determine the overall winner of the tournament.  There are no Player of the Year points awarded for this tournament.  All three nines are used in this tournament.

The Memorial Cup is the final tournament of the year to determine Player of the Year.  It is a two-day full field individual unflighted stroke play event.  It has the most points of any tournament associated with it.  All participants will play from the Men's Club tees that vary from 6200 to 6300 yards in length.  The tournament shall be played on Ridgeline and Creekside on Saturday and Creekside and Canyon Crest on Sunday.

The Ryde Cup is a match play event pitting two teams comprised of the top 32 players from the Player of the Year points list.  This is a non-point event that concludes the 2020 season.

This is a trip organized by the Men's Club to a destination outside the local area.  In the past it has been held in Las Vegas, Palm Springs, Temecula, and Arizona.  Participants play two rounds of golf in a tournament format and the group gets together for dinner on one night.  This trip is limited due to the availability of tee times and is on a first-come first-served basis. 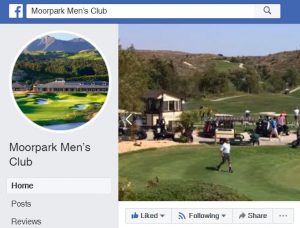